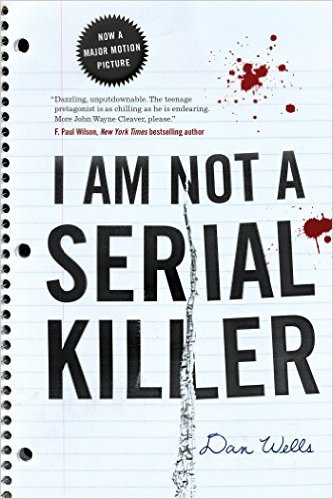 Fifteen year old John Wayne Cleaver might be a sociopath. He finds it almost impossible to empathize with other people. He has a fascination with murder; specifically serial killers. He has one friend whom he can barely stand but keeps around because he wants to keep up the appearance of not being a loner. His one pleasure in life is working in the embalming room of his family’s mortuary. But despite all this, John Wayne Cleaver is not a serial killer. In fact, he has a very strict set of rules he imposes on himself to prevent him from becoming one. John’s carefully ordered life is thrown into chaos when an apparent serial killer starts murdering people in his tiny rural town. John is naturally fascinated by the unknown killer, which deeply concerns both his mother and his therapist.

I picked this book up because it was a book club selection but I really was just expecting it to be a YA Dexter. I was pleasantly surprised when it wasn’t. I was also pleasantly surprised to be dead wrong (pun intended) about the “twist” that I thought I saw coming. The book definitely takes an unexpected turn about 100 or so pages in which I won’t spoil for you here. Suffice it to say that this book is definitely not YA Dexter. Dan Wells makes John equally scary and sympathetic. I’m not quite sure how to categorize this book, but if you’re looking for a different sort of read for the Halloween season, I’d definitely check this one out.