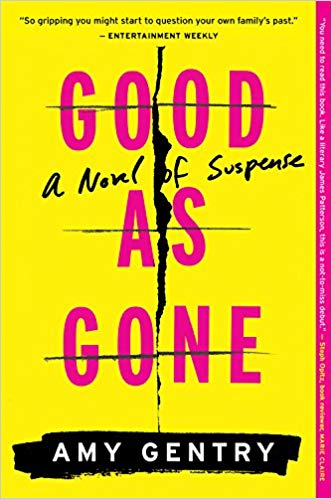 How does it affect a family when the worst thing imaginable happens? How do parents influence their child’s decisions without even realizing that they’re doing it? How do you deal with the fact that your long lost loved one might be an imposter? These are some of the themes throughout Amy Gentry’s suspense novel Good as Gone. The novel begins eight years from the present day when young Julie Whitaker is taken from her bedroom at knife point by an unknown abductor never to be seen again. The only witness is her terrified younger sister. We rejoin the family in the present and a young woman whom they immediately recognize as Julie knocks on the door. After the initial excitement dies down, her mother Anna begins to have doubts that this young woman is her long lost daughter. She is contacted by a private investigator who only serves to inflame those doubts.

While I did kind of figure out where this book was going, it was after several wrong guesses and it was very late in the book. The book switches perspectives between Anna and MaybeJulie and once you get used to the format it flows nicely. The characters are a little bit infuriating but given their history of trauma and loss it’s understandable. The action moves along swiftly but it never feels rushed or glossed over. The ending is the sort of neatly tied up package the never happens in real life but sometimes that’s just what you need.

I immediately added Amy Gentry’s next book, As Long as We Both Shall Live to my TBR list as soon as I finished this one. She has the potential to be as great a suspense writer as Megan Abbott.