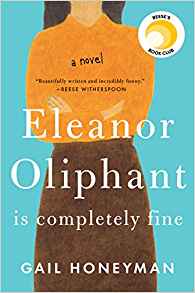 Eleanor Oliphant is completely fine. Unless you’ve never in your life opened up a work of fiction, you can probably guess that Eleanor is the opposite of fine. However she spends the first half of the book telling herself, and consequently the reader, that she is. She has a perfectly ordered life working five days a week and on nights and weekends eating frozen pizza and drinking wine and vodka to pass the time (our first hint that things aren’t “fine”), and talking to Mummy every Wednesday night on the phone. Two consecutive events occur to shake up Eleanor’s world. First she attends a concert after winning a free ticket in a work raffle and falls in love with the singer. Second, she and a coworker assist an old man who collapses in the street in front of them. Once Eleanor find her life intertwined with other people, she starts to realize there better things to be than “fine.”

My immediate thought about Eleanor is that she may be somewhere on the Autism Spectrum. She clearly has issues with social interaction and tends to say exactly what she’s thinking and tends to be overly literal about things. That may still be true, but the more I learned about Eleanor and her Mummy, the more I realized she had much more reason to hide from the world than ASD. As Eleanor pursued her crush on the singer and became closer to her new friends, I became equal parts nervous and hopeful for how things would turn out for her. And that’s what opening yourself up to other humans feels like; nervous and hopeful. I don’t want to spoil anything but Eleanor experiences some serious ups and downs with these new changes in her life, but because of a chance meeting on a street corner, she doesn’t go through them alone.

I am suddenly living on my own in the first time in my life so this book rang a lot of emotional bells for me. Obviously my situation isn’t the same as Eleanor Oliphant, but it definitely drove home the importance of keeping up my current friendships and even forging some new ones so that I can more better than just “fine.”