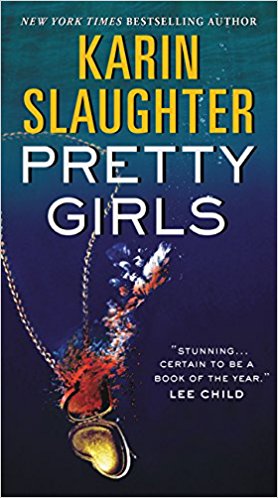 The key to a good suspense/mystery novel is similar to that of a good horror film. The characters reactions to things have to be realistic and make sense. That doesn’t mean they have to necessarily be smart or follow basic common sense. It means they have to make sense given what we know about the character’s past experiences and personality. That way, when everything goes pear shaped, it feels like these things are being experienced by a real human and not merely a vessel to move the story forward. Pretty Girls hits the nail on the head. I hate to use a cliched term like “non-stop thrill ride,” but reading this book was a lot like riding a roller coaster. I found myself having to take a breather from this book every once in awhile because it got too intense.

Lydia and Claire are two sisters who have not spoken in twenty years. Their relationship slowly deteriorated after their sister Julia disappeared without a trace from her college campus one night. The incident destroyed their once happy family. As the book begins, Claire’s husband is killed in what appears to be a botched mugging. This sets in motion a series of events that throw the two sisters back together as are drawn deeper into the mystery, not only of her husband’s death but of their missing sister.

Aside from being a hell of a good mystery, this book depicts the emotional toll taken on a family when a child goes missing. It packed an emotional wallop throughout. I will give a warning for extremely graphic depictions of murder and rape. It’s rough material but given the themes of the book I don’t think it’s extraneous.