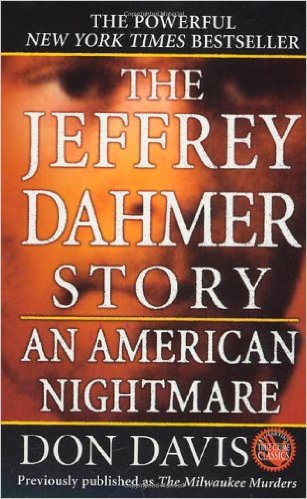 Well I haven’t had a book rated less than 3 stars all year so I guess I was due for a stinker.

I started a book club last month for fans of the new podcast My Favorite Murder. If you’re a fan of true crime, I highly recommend it. This book was the first selection and it was not good. It reminded me of a few papers I wrote in college (thankfully just a few) where I procrastinated like hell and when I finally sat down to write, I realized I did not have enough information gathered and I had zero time gather more. I just bullshitted and quoted like crazy to fill the space until I was done. That’s what this book reads like; A half-assed research paper.

Unless you’ve been living under a rock or maybe if you’re super young, you know who Jeffrey Dahmer was. He was a serial killer who murdered 17 young men, mostly gay and mostly racial minorities. This book was originally published in 1991, before Dahmer’s trial had even concluded and the ramifications of his crimes could truly be felt. The writer tried for a more high brow approach to crime writing by adding local history. This can be an effective technique if it’s done correctly and it’s relevant to the narrative. The writer spends dozens of pages on the history of Akron, Ohio. Dahmer’s childhood home is located in Bath Township, which is a suburb of Akron but otherwise has nothing to do with the story. I can only assume Don Davis is from Akron and wanted to use some hometown history to fill out his book.

There are some interesting parts. The murders did expose the racial divides that existed in Milwaukee and caused a great deal of social and political tension in the city. It would have been interesting to see how all of that shook out given some time and perspective. But this was lost in the rush to publish this book while Jeffrey Dahmer was still in the news.

There are excellent true crime books. Ann Rule, Jon Krakauer and Erik Larsen have written some great ones. Do yourself a favor and pick up one of their books and give this one a pass.